“For what I’ve seen of programmers,
they’re either good at all languages or good at none.
The guy who’s a good C programmer will be good at Erlang;
it’s an incredibly good predictor.
I’ve seen exceptions to that but the mental skills necessary to be good at one language seem to cover to other languages.”

Reeborg, our Karel simulator, and Python, its language

The author of our robot simulator, Reeborg, is the Canadian physicist André Roberge (see our Hall of Fame).

The simulator runs in Python, the most popular computer language in the world, used extensively in academia, research and industry, and often used as a first language because of its clarity. 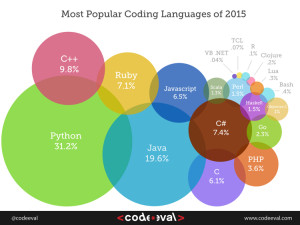 Let’s start it up and solve a mission: click here.

First, identify the different parts of the interface: 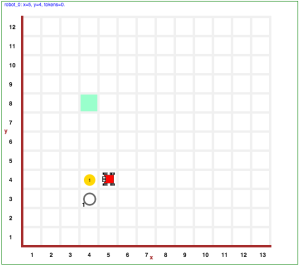 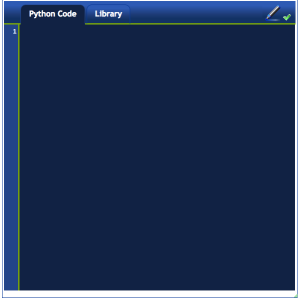 On the top-left area, from left to right, we these buttons:

We are now going to solve a mission based on the world that we saw before. Karel needs to pick up the yellow token, put it in the basket and then go home. So let’s get started.

A comment is text that is not part of the program; it has information for the programmer, not for the computer, i.e., it is like a margin note. In Python, any text that follows a hashmark # is a comment. 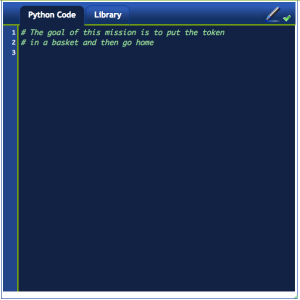 Now, when we run the program (i.e., when we press the ‘play’ button), the program will run and fail because, although the program is valid, it does not achieve any of the goals of the mission, i.e., there is no token in the basket and there is no robot on the green square.

The following are a few functions that will appear often in our missions.

Let’s add them in our program: 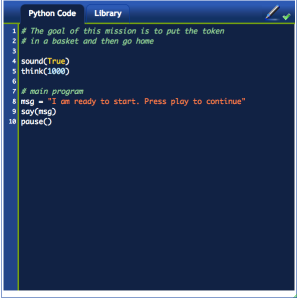 With these commands we are:

An actuation command (or function) allows a robot to act. Karel has 4 built-in actuation functions:

Let’s use these commands to accomplish the first task, i.e., to put the token in the basket, adding the following code: 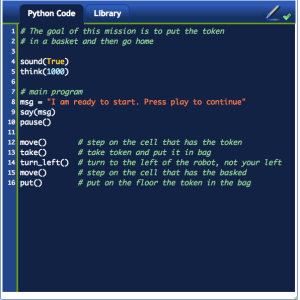 When we run the program now, it still fails but indicates that the tokens are now in their correct final location. 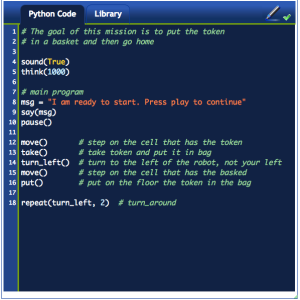 In summary, instead of writing this:

we are going to write this:

In particular, turn_around() does exactly what we just did ourselves: turns the robot around by using repeat(). Thus, instead of repeating the code, we just use the command already written in the library. We tell Python that we want to use the commands in the library placing the following line at the top of our program:

which means ‘allow my program to use everything in my_lib‘.

Hence, we can modify our program to use the library like this: 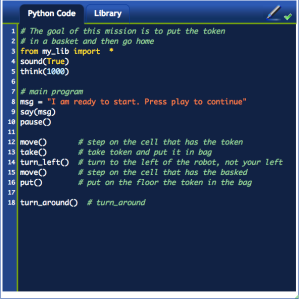 What? The training mission is incomplete: Karel needs to go to the home square. Please, finish the mission and take Karel home for a well-deserved rest after all this token taking-and-putting.

Ahh!.. the chicks got out of the pen. Quick.. return them to the pen and then take Karel home. 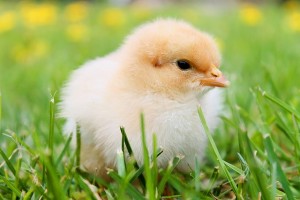 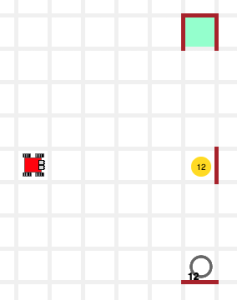 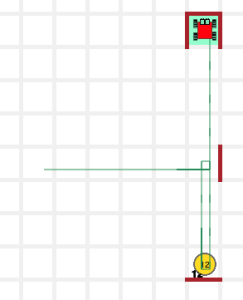 There are no 5th or 6th grade mission this week because we covered a lot of material. If you were able to do the 4th level mission you are perfectly on pace. Congratulations.