This material complements section 2 – combinatorial logic design. I could not find any website with information about logic gates with PNP transistors; for our purposes, the following circuits work fine. As a general note, when using a voltage of around 5.5-5v, the resistance at the base of the transistor should be about 10kΩ, while the resistance of the emitter or collector should be about 1-5kΩ. We’ll go over circuits that produce all the possible outputs for one and two inputs, with the exception of Xor and Xnor, for which we will devote a special section.

NPN and PNP Not gates

Notice that the NPN-based buffer and the PNP-based negator have the same configuration; the only difference is the transistor. Likewise, the PNP-based buffer and the NPN-based negator also have the same configuration. To go from one of these circuits to the other, all we need to do is replace the transistor with a complementary one. Complementary transistors use about the same power, we can trigger them with the same base currents, and their specs are such that the circuit that places one of the transistors in saturation places the other one in the cut-off region (see our previous tutorial on BJT transistors).

The De Morgan’s laws are two transformations of boolean expressions that allow us to express Or operations as And operations, and vice-versa. They are:

In the rest of this page we will find two-transistor circuits for many 2-input logic functions; these expressions are equal to their De Morgan-transformed expressions.

We connect transistors in series when we stack them one on top of the other, like battery cells in a flashlight.

We can get an And gate using two NPN transistors connected in series in a common collector configuration: 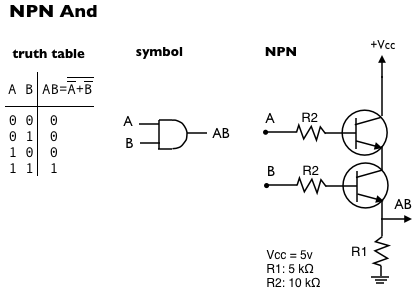 When we replace the NPN transistors of the And gate with PNP transistors, we get a Nor gate: 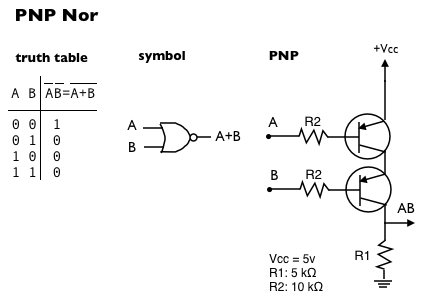 Normally we synthesize logic functions using a combination of standard gates; we can find buffers, Not’s, And’s, Or’s, Nand’s and Nor’s pre-packaged in integrated circuits (IC) chips like those of the 74xx series. We can build any logical output combining these standard gates. For example, suppose that we want the output to be 0010, i.e., we want the output to be a logic 1 only when the first input is 1 and the second is 0; logically speaking, we can achieve this output combining a Not and an And gate, and we can realize the circuit using a Not gate from a 7404 chip, and an And gate from a 7408:

The circuits that implement gates in ICs are more complex than the simple circuits that we are using in this page. The circuits in ICs address aspects like switching speed or fan-in. Still, suppose that we were to build the 0010 circuit that we built using ICs using our simple gates instead. If we use only NPN transistors, we would get something like this:

A straight mapping of the IC circuit to discrete gates requires three transistors: one for the Not gate and two for the And gate. The number of transistors in a circuit is proportional to the area that it occupies, the power that it consumes, and the heat that it produces, so in general, circuits with less transistors will take less space, consume less power, and produce less heat, all of which are desirable features.

We can get a Nand gate using two NPN transistors connected in series in a common emitter configuration: 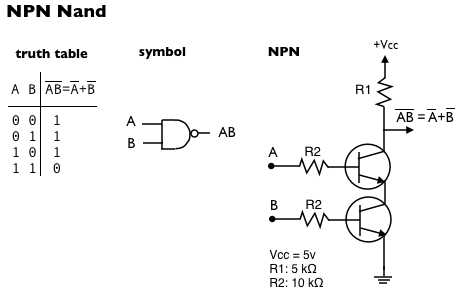 When we replace the NPN transistors of the Nand gate with PNP transistors, we get an Or gate: 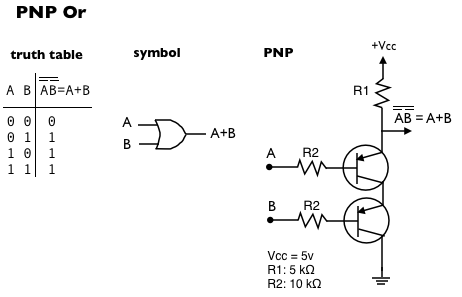 Replacing one of the NPN transistors of the Nand gate with a PNP transistor moves the output 0 to a different combination of inputs as follows:

We connect transistors in parallel when we place them next to each other, like when we jump-start a car battery with another one.

Since we already described the gates, we will simply reiterate the De Morgan equivalences, the truth tables and point out the circuit: 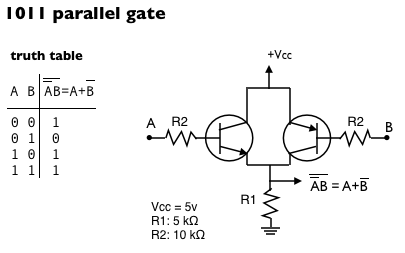 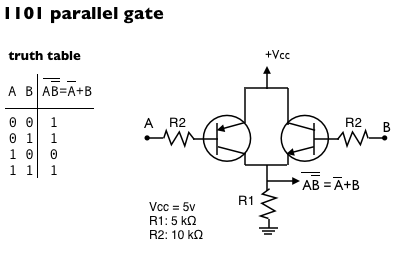 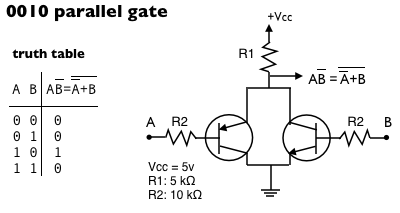 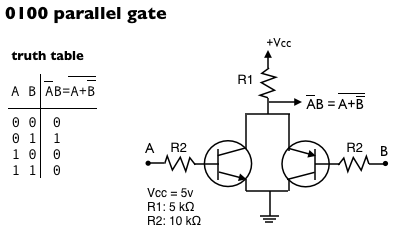 Usually there are many ways to solve a problem. Even with something as simple as finding a circuit that implements the 2-input-1-output logic functions described above, we have found solutions that use standard gates, series configurations, and parallel configurations. Most problems in life are the same: there are multiple solutions to any problem, and if we look carefully, we’ll find that some are better than others depending on the resources that we have at hand.

NPN and PNP transistors are two sides of the same coin. Whatever we can do with an NPN transistor, we can do with a PNP transistor. There are certain tradeoffs that have made NPN transistors a better choice for integrated circuit design. However, these tradeoffs have little to do with discrete element design. What we do not want to do is ignore possible solutions to a problem because we might have been blindsided to consider only solutions biased by the popularity of NPN designs, or constrained by the standardization of gates in chips.