We can visualize addition using sets:

or the number line:

Although the following two forms describe the same addition process, sometimes it is easier to solve a problem using one form than the other.

is the same as

The Associative law of addition

It says that when we add three numbers, it does not matter which two numbers we add first:

because in both cases the result is the same. From here we get that

When adding numbers with multiple digits, it is often useful to use a decimal decomposition, e.g.,

We can use this decomposition to simplify additions, e.g.,

The U.S. standard addition algorithm adds the digits from right to left, “carrying” sums greater than a digit to the next place value:

The ‘carry’ is more significant than the number that we are writing under the line; to avoid forgetting to write the ‘carry’, get in the habit of saying, say, 7 + 5 = 12; then write the 12, in that order: first the 1, as a carry, and then the 2, under the line.

Another way to add the numbers is adding by place values; this is longer but avoids errors of forgotten carries.

When writing a sum of a sequence we usually use dots, or the symbol for a summation:

The same applies for infinite sums:

An easy way to add sequences of numbers is using Gaussian addition. Say that we want to add the numbers from 1 to 5:

We can obtain the same result if the write the sequence backwards:

Now, we pair up the terms of each sum to obtain two times our original desired result V:

Because of the symmetry of the columns, the vertical pairs add up to the same number:

and we finally solve for V:

In general, the sum of all the numbers from 1 to n is

We can use Gaussian addition to add many other sequences. For example, let’s add the odd numbers from 20 to 50:

Natural numbers (a.k.a. ℕ): we use them to count, like 1, 2, 3,…, etc. There is no universal agreement about whether the natural numbers should include 0 so we have the following more specific sets:

Rational numbers (a.k.a. ℚ, from the word “Quotient”): These numbers are ‘rational’ because they come from ‘ratios’. This set contains all the numbers that are ratios of two integer numbers, and all their corresponding decimals, whether their representation is finite, or periodic infinite. Some examples are:

Irrational numbers (a.k.a. ℝ\ℚ, meaning ‘real minus rationals’): This set contains all the numbers that are not the ratio of two integer numbers; all their decimal representations are infinite and non-periodic. Some examples are:

Real numbers (a.k.a. ℝ): This set contains all the rationals and irrationals, i.e., all the numbers in the number line.

In summary we have the following relationship: 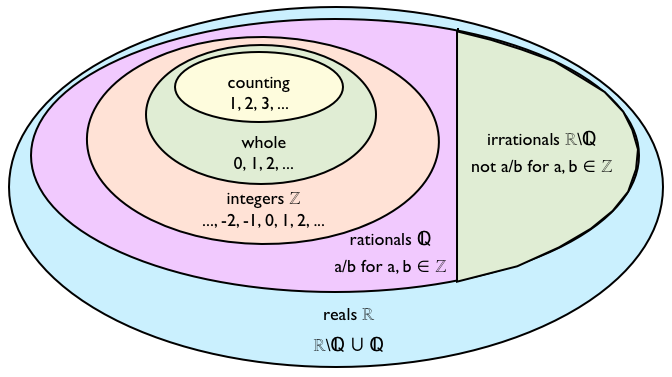 4. Add using both the U.S. standard and decimal decomposition algorithms

6. Use Gaussian addition to add the odd numbers from 10 to 50

“take all the time you want” problems:

For the following problems use…